Shirley Bassey Something Else 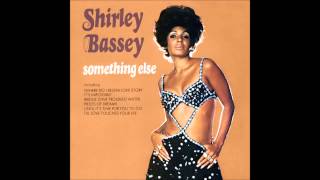 This collection of songs recorded by U.K. pop diva Shirley Bassey was originally released in 1971 and contains 14 tracks.
English version features two additional songs.
CD contains bonus tracks.
In keeping with the title, Shirley Bassey's follow-up to her 1970 hit LP Something does indeed present a bit of a change of direction. In fact, it's a step back to her MOR dates of the mid-'60s; the album includes no recent rock standards, and the arrangements focus on full-orchestra symphonic pop with fewer nods to the contemporary scene. Though it didn't chart quite as high as its predecessor, it did make the Top Ten while her version of "(Where Do I Begin) Love Story" hit the Top 40 in Britain. Most of the album is given over to large scale, dramatic pop songs -- "It's Impossible," "Bridge Over Troubled Water," "Until It's Time to Go" -- best treated by a full-throated vocalist like Bassey. It's not quite as raucous or adventurous as Something, but it must've been an easier album to digest for Bassey fans from way back. ~ John Bush

Something Else Music Lover: Anonymous from Astoria, NY US -- September, 29, 2007


This golden collection of Dame Shirley Bassey really takes me back to wonderful memories. I recommend this CD highly. Dame Shirley really is Something Else.