Q: 4 Stars - Excellent - "...a feverish, thrilling set right on the edge of what was then impossible..." 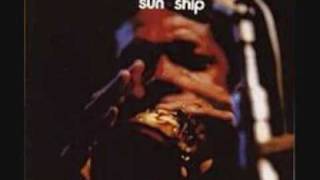 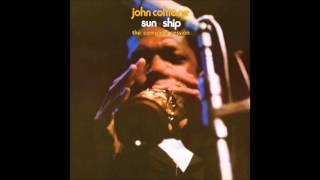 Personnel: John Coltrane (tenor saxophone); McCoy Tyner (piano); Jimmy Garrison (bass); Elvin Jones (drums).
Producers: Bob Thiele, John Coltrane.
Reissue producer: Michael Cuscuna.
Recorded at RCA Studios, New York, New York on August 26, 1965. Originally released on Impulse!/ABC Records (AS 9211). Includes liner notes by David A. Wild
All tracks have been digitally remastered using 20-bit technology.
Following the release of A Love Supreme, John Coltrane entered into a year of furious creation, including the recording of dramatic, iconic works such as Ascension and Meditations. While many of his fans couldn't make the leap of faith required for a sojourn into Coltrane's emotive new sound, those who surrendered to the dramatic outside interplay of his classic quartet bore witness to spiritual transformations of enduring innovation. Recorded on August 26, 1965 (and not released until after his death), Sun Ship is Coltrane's final recorded date with his famed quartet. Pharoah Sanders would join the group the following month, and pianist McCoy Tyner and drummer Elvin Jones would depart in January of 1966 to be replaced by Coltrane's wife Alice and Rashied Ali. It is also one of the saxophonist's most intense performances as well as a testament to the maturity and resourcefulness of his rhythm section. With nearly four years experience together, McCoy Tyner, bassist Jimmy Garrison, and Jones had achieved a vital collective identity; yet each man was an innovator in his own right. When Coltrane moved toward metrically free styles of rhythm and melody (with tunes often based on one chord or a short series of notes as themes), the quartet's rhythmic pulse and collective interplay evolved accordingly. The title track opens the recording auspiciously, with a splintered chanting theme. Garrison and Jones regroup dramatically around the leader's clarion calls, then rhythmically abstract the tune's pulse, moving away from strict tempos and linear swing; they imply a central rhythm more than state one, as Tyner crafts a monumental solo full of crashing modulations and heated single lines. Coltrane re-enters at full tilt, alternating throttled upper register cries with crunching bass declamations, using multiphonics and altissimo notes as the levitating rhythm boils around him. Garrison and Jones are featured on "Ascent" and "Attaining," where they unveil bold new solutions for coming in and out of tempo and manipulating dynamics while maintaining the amorphous ebb and flow. The gyrating, oceanic waves of "Dearly Beloved" suggest earlier ballad explorations such as "Alabama," with Coltrane's keening tenor providing a taut melodic focus for the multi-layered, ritualistic rhythms surrounding him. Tyner's great chordal waves and contrapuntal motion build to a surging climax before Coltrane re-enters to bring them all home. And with "Amen," Coltrane announces a spare modal theme that evokes a deceptive sense of the older swing, but is another expression of his new freedom. Garrison walks, then strums, surging forward, pulling backwards, elongating and elasticizing the pulse, as Tyner essays swiftly with sweeping lines and rumbling chordal fanfares. While a summation, Sun Ship is also a fervent prelude for Coltrane's final period of brave -- and often musically perilous -- transformation. ~ Thom Jurek

Jimi Hendrix
Are You Experienced
$15.40
Add to Cart

23%off
John Coltrane
The Complete Stockholm Concerts (3-CD)
$9.98 on Sale
Add to Cart