Ennio Morricone The Good, the Bad and the Ugly [Original Motion Picture Soundtrack] 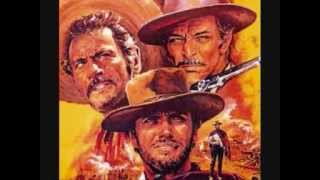 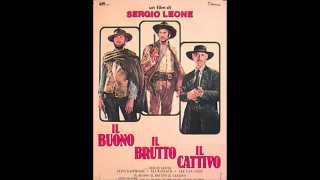 Composer: Ennio Morricone.
Composer: Joe Pipps.
Personnel: Joe Pipps (vocals, guitar, organ, drums); Bubba Godde (vocals, guitar, drums); Kenny Yetman (drums).
A major influence on Western scores right into the nineties, Morricone's music utilizes quite a remarkable array of musical tools. There's a traditional element of Western underscore, with a brassy feel to it, but this is joined throughout by thundering percussion that includes a lot of bells, various arrangements of voices, clanging acoustic and electric guitars, and even a prepared piano. Aside from the famous title track with its Shadows influences, there's a lot here to recommend this particular score -- there are moments of intense drama and incredible beauty that are rarely heard in motion picture underscore, giving the work a classical feel. A cover of the title track provided Hugo Montenegro with a major British hit. [In 2004 Capitol released an expanded and re-mastered edition that re-integrates nine tracks that were omitted upon the album's initial release.] ~ Steven McDonald

Ennio Morricone
Once Upon a Time in the West
$8.20
Add to Cart

Ennio Morricone
The Good, The Bad and The Ugly (Original Motion Picture...
$13.60
Add to Cart