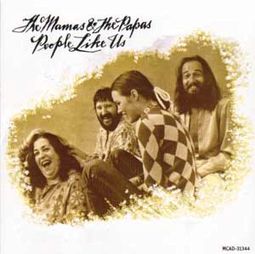 Get email alerts for The Mamas & the Papas
24 ratings
Available: Usually ships in 5-7 business days
Add to Cart
Add to Wishlist
Format:  CD
item number:  33EF4
Related products:
Creedence Clearwater Revival: Live at Woodstock for $15.40
Bob Dylan: The Bootleg Series, Volume 15: Travelin' Thru (3-CD) for $54.98
The Mamas & the Papas: If You Can Believe Your Eyes and Ears for $8.60
91% recommend us!

You can say the album's title two ways, and unfortunately, by the time of this 1971 reunion album, one of them was sadly incorrect. When the Mamas And The Papas broke up in 1968, it was due to intra-band romantic entanglements and increasing drug use, but the fact that their patented brand of folk-rock-based close harmony sunshine pop was rapidly going out of fashion certainly didn't help.
Cass Elliott was the only one who had any solo success, but somehow John and Michelle Phillips and Denny Doherty were able to convince her to come back for this album. It was a commercial flop, but fans of the group have retroactively discovered it to be an interesting meld of sunshine pop and Laurel Canyon-style country rock. The title track, "Snow Queen of Texas" and the lilting "Pacific Coast Highway" are particular highlights.