Rolling Stone: "...the record as a whole has not the charm that his first develops after a long while--it is not as likable, because it is frequently down and out depressing..." 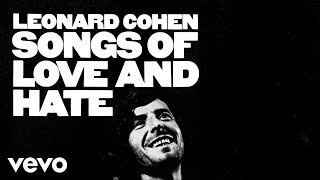 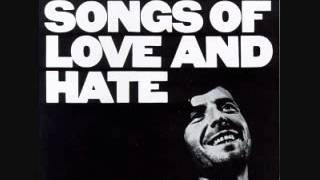 Rolling Stone - 9/2/71, p.43
"...the record as a whole has not the charm that his first develops after a long while--it is not as likable, because it is frequently down and out depressing..."
Q - p.132
4 stars out of 5 -- "The record itself is a masterpiece of bitterness and cynicism....The self-lacerating honesty makes it the most fascinating album of his early career."
NME (Magazine) - 8/12/00, p.28
Ranked #5 in The NME "Top 30 Heartbreak Albums" - "...[His] most vicious, lonely and unforgiving album....Much, much more than the sum of its dark, monumentally crafted parts, and a soundtrack to a generation of bedsit breakups."

It doesn't get darker than this. Though Leonard Cohen had already established himself as the doyen of doom with his first two albums, his third, SONGS OF LOVE AND HATE, finds him kicking off the 1970s with the sharpest repudiation of the '60s peace-and-love/flower-power ethic the world had yet seen from the "sensitive troubadour" corner of the music map. Though it's not really a "concept album," SONGS OF LOVE AND HATE feels like a guided tour through one man's battle-scarred love life. The utter emotional degradation of "Avalanche," the suicidal frenzy of "Dress Rehearsal Rag," and the bitter regret of "Last Year's Man" all sound like stops on the same ill-fated journey. The arrangements are wisely based around Cohen's world-weary voice and hypnotic acoustic-guitar patterns, with occasional orchestrations rising like dark clouds in the background. Possibly Cohen's finest album, LOVE AND HATE would stand as a monument to explorers of the musical Dark Side for decades to come--such as Nick Cave, who memorably covered "Avalanche"--and to anyone nursing a bitter, broken heart.