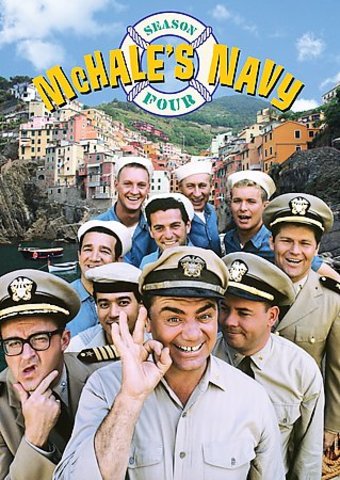 Television enjoys a long tradition of military send-ups, from Phil Silvers' Sgt. Bilko to the merry pranksters of M*A*S*H, and MCHALE'S NAVY remains one of the finest. Starring Academy Award-winner Ernest Borgnine (MARTY) as the rebellious naval officer Quinton McHale, the 1960s sitcom wrung laughs out of the clash between his fun-loving crew of "pirates" and the martinet Captain Binghamton (Joe Flynn). From episode to episode, the beleaguered captain would scheme new ways to send McHale's rowdy bunch of girl-crazy con-men to the brig, only to have them pull off an important military maneuver, just in the nick of time. This collection includes every episode from the show's fourth and final season.

Lieutenant Commander Quinton McHale (Ernest Borgnine), Ensign Parker (Tim Conway) and the rest of the oddball crew of PT-73 get onboard for one more season of ship-tipping adventures.
Season 4 finds McHale and company relocated halfway around the world, as they have been transferred off Taratupa Island to an American Naval base in Voltafiore, Italy. Between the scheming Mayor Mario Lugatto (Jay Novello) and Army Colonel Douglas Harrigan (Henry Beckman), reassignment isn't all it's cracked up to be, and with Captain Binghamton (Joe Flynn) out for blood, McHale has his hands full.
From 1962 through 1966, McHale's Navy was a must-see staple of ABC Television. This fourth season marked the end of what has since become one of the true classics of television comedy and includes a hilarious guest appearance from Don Knotts.