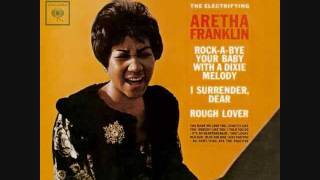 EU-only 180 gm vinyl LP pressing including two bonus tracks, deluxe inner sleeve and digital download. This quintessential edition includes Aretha's second LP, THE ELECTRIFYING Aretha Franklin, long unavailable on vinyl. The album indeed electrified audiences when it was released by Columbia in 1962, winning Aretha top honors in Down Beat magazine's prestigious listeners' poll. One can easily hear her divinely inspired soul fire, emerging interpretative grace and vocal sophistication. Aretha's singing reveals a sweet, even coy insouciance on songs like "Blue Holiday" and alternatively, a roof-raising belt on "Rough Lover". It is easy to detect the soul already present in Aretha's performances, seemingly influenced in equal part by Jazz and Gospel. Three of her best tracks here, "I Told You So", "Ac-cent-tchu-ate the Positive" and "Operation Heartbreak" (where she belts out soul with real gusto), are the tunes that point most convincingly to her future triumph as the Queen of Soul.

53%off
Aretha Franklin
Through The Storm
$6.98 on Sale
Add to Cart

57%off
Aretha Franklin
Collections
$5.98 on Sale
Add to Cart