They grow up so fast. 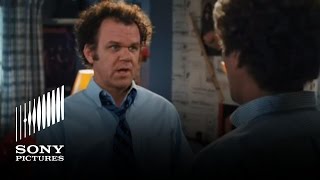 Watch the trailer for STEP BROTHERS

While nearly all Will Ferrell's films are enjoyable on some level, they tend to fire on all cylinders when Adam McKay is involved. McKay co-wrote and directed ANCHORMAN: THE LEGEND OF RON BURGUNDY and TALLADEGA NIGHTS: THE BALLAD OF RICKY BOBBY, two of Ferrell's most popular and consummately hilarious films. McKay reteamed with not only Ferrell for STEP BROTHERS, but also Ferrell's co-star in TALLADEGA NIGHTS, John C. Reilly (who has steadily proven himself to be one of Hollywood's most versatile actors); and though STEP BROTHERS may be the most threadbare of the three movies on which the duo have collaborated, it's arguably their best.

The plot is about as simple as they come: Brennan Huff (Ferrell) and Dale Doback (Reilly) are deadbeat man-children thrown together when the single parents with whom they live marry. The two initially despise one another, but become fast friends over a shared love of ninjas, COPS, porno mags, and the comforts of living in the fantasy world of a prolonged adolescence. What makes STEPBROTHERS so much fun, however, has nothing to do with story or script; rather, it's McKay's foresight to step back and let Ferrell and Reilly run wild. The duo kick and punch, fart and burp, laugh and cry, yet somehow elevate such banalities to a level of grotesque poetry, hitting upon what feels like an entirely new comedic language. When the pair act like children, they are not presenting themselves as immature adults, but are literally acting like children, meticulously duplicating everything from the fears and concerns to the speech patterns and awkward physicality of children. It sounds simple enough, but it requires a dexterity and sense of timing and delivery that is actually quite amazing. In the end, STEP BROTHERS is really nothing more than an absurd comedy; then again, isn't that what they called WAITING FOR GODOT'

Brennan Huff, a sporadically employed thirty-nine-year-old who lives with his mother, Nancy. Dale Doback, a terminally unemployed forty-year-old who lives with his father, Robert. When Robert and Nancy marry and move in together, Brennan and Dale are forced to live with each other as step brothers. As their narcissism and downright aggressive laziness threaten to tear the family apart, these two middle-aged, immature, overgrown boys will orchestrate an insane, elaborate plan to bring their parents back together. To pull it off, they must form an unlikely bond that maybe, just maybe, will finally get them out of the house.