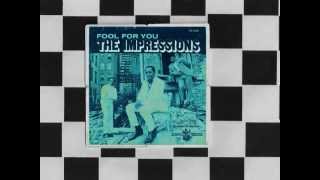 Soul Music The Impressions- I'm A Fool For You (Music Video)

Rolling Stone - 2/4/93, p.69
4 Stars - Excellent - "...a remarkable document...this collection connects a decade's worth of gentle Impressions singles with the power and invention of Curtis Mayfield's solo career...a stunning picture..."
Entertainment Weekly - 1/29/93, p.57
"...this set is more than just a long-overdue reissue; it also serves as a vivid mini-history of soul, from '60s vocal harmony through '70s blaxploitation. Essential..." - Rating: A
Musician - 6/93, p.94
"...Even if you already know the big hits, this deeply satisfying two-CD feast holds wondrous delights..."

Producer: Curtis Mayfield.
Compilation producer: Andy McKaie.
Recorded between 1961 and 1977. Includes liner notes by Robert Pruter.
Digitally remastered by Robert Stoughton (MCA Recording Studios, North Hollywood, California).
Recording information: 07/1961-??/1977.
If Chuck D. is the modern music's incarnation of Malcolm X, then Curtis Mayfield must surely be its Martin Luther King. From the inception of his career, Mayfield has created some of the warmest, most uplifting music that secular soul music has ever offered. ANTHOLOGY focuses mainly on his tenure with The Impressions--his seminal gospel based '60s group. Mayfield's intent was always clear: a ringing message of peace and brotherhood. His message for equality was insistent, yet it came with an open hand rather than a closed fist. The trust in humanity such a stance required during the '60s is evidenced in the beauty of Mayfield's songs.
"Meeting Over Yonder," "Keep on Pushing," and perhaps most importantly, "People Get Ready" overwhelm on musical merit alone. What is most impressive, however, is the power that lies in lack of bitterness or cynicism in these songs. As Mayfield moved on to a solo career, he became even more didactic, practically inventing funk in process with "Freddie's Dead" and "Superfly." He sunk into expansive grooves, displacing the glory '70s drug-induced complacency with wah-wah guitars and loping melodies. ANTHOLOGY ends on a decidedly positive note, which is probably how Mayfield prefers it.