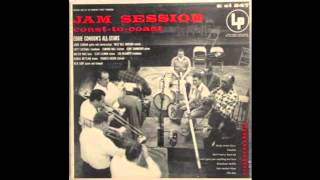 Personnel: Eddie Condon (guitar); George Van Eps (guitar); Edmond Hall, Matty Matlock, Peanuts Hucko (clarinet); Walter Page, Phil Stephens (baritone saxophone); Dick Cary (trumpet, piano); Clyde Hurley (trumpet); Wild Bill Davison (cornet); Abe Lincoln, Lou McGarity, Cutty Cutshall (trombone); Stanley Wrightsman, Gene Schroeder (piano); George Wettling, Nick Fatool, Cliff Leeman (drums).
Recording information: Los Angeles, CA (10/23/1953/11/24/1953); New York, NY (10/23/1953/11/24/1953).
Arranger: Eddie Condon.
Eddie Condon and his band -- including Wild Bill Davison (cornet), Cutty Cutshall (trombone), Edmond Hall (clarinet), Gene Schroeder (piano), Walter Page (bass), Dick Cary (trumpet), Lou McGarrity (trombone), Peanuts Hucko (clarinet), Cliff Leeman (drums), and George Wettling (drums) for the extended "Jam Session Blues" -- cut four tracks for this LP (which they shared with the Rampart Street Paraders). The four Condon numbers are extraordinary pieces, capturing a working band that played nightly at Condon's during their peak, and though they're in the studio they might as well have been playing live for all of the spirit and verve captured on these sides. "Beale Street Blues" is so spot-on perfect from its opening note that it sounds like it has to be cut into as part of a larger jam, which it was not; this band was simply so tight and swinging that they created the illusion. The band also turns to some beautiful balladry on "Emaline," which features a choice solo by trombonist Cutshall, before sliding into "I Can't Give You Anything but Love" featuring Davison and Hall. If there's a real highlight on this album, however, then it's the ten-minute-plus "Jam Session Blues"/"Ole Miss," which features solos by the entire band, jamming in a laid-back fashion to the opening blues before switching gears to the more quick-tempo W.C. Handy-authored second half. ~ Bruce Eder

59%off
Bobby Hackett
Live from the London House
$6.98 on Sale
Add to Cart

54%off
The Boilermaker Jazz Band
Honky Tonk Town
$5.98 on Sale
Add to Cart