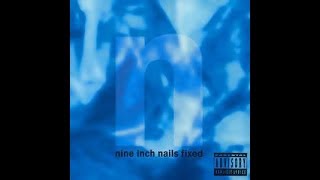 Contains remixes of song on BROKEN.
Nine Inch Nails: Trent Reznor (vocals, various instruments).
FIXED is the remix EP companion to 1992's BROKEN, featuring new versions of "Wish" and "Happiness In Slavery."
The companion piece to Trent Reznor's explosive industrial rock / metal opus Broken, Fixed sees the songs twisted through an intense remix process that makes them even darker than the original doom rock creations they began as. With contributions from noted studio experts like J.G. Thirlwell, Coil, Butch Vig, and Reznor himself, the more industrial versions of these guitar-themed tracks appear in a completely new light. The mixes range from sinisterly quiet to more beat- and drum-oriented, but they also retain the awesome power of the core compositions. The remix of the Grammy-winning "Wish," for instance, features a lengthy, saturated drum intro, which only gives it more credence when it erupts into the original buzz-saw guitar riff that dominates the track. Other mixes incorporate backwards tapes and difficult-to-pinpoint noise manipulations, but rather than building the songs to the point where things grow tedious, they tend to completely tear them apart while adding to the apocalyptic vision that envelopes the original disc. Even though Nine Inch Nails was thrust into the mainstream spotlight, this record shows the group returning to its roots and creating a daring new translation of songs that were pummeling from the start. Alongside "Wish," both "Gave Up" and "Happiness in Slavery" are given a few new readings, and while they are nowhere near as direct as the vicious attack of Broken, Fixed is still an impressive feat and a necessary counterpoint to an important record. ~ Peter J. D'Angelo