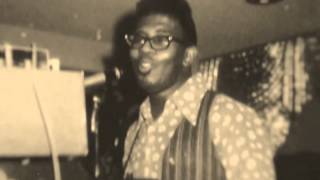 Living Blues - p.72
"The arrangements are roughshod but effervescent in the great tradition, and everything sparkles with the hellbent enthusiasm that characterized the classic rock 'n' roll era."
Mojo (Publisher) - p.114
4 stars out of 5 - "[T]antalisingly versatile..."

Liner Note Author: Tony Rounce.
Photographer: Eric Predoehl.
Though Ace had previously issued a compilation of Richard Berry's recordings for the Modern label (Get Out of the Car), this 28-track compilation -- including eight previously unreleased cuts, the majority of them alternate takes -- surpasses it as a more thorough document of his time at the company. Technically speaking, it doesn't contain every last recording he did there, though it does have a version of every track he did under his own name for Modern; on occasion, an alternate take was used (the details are in the lengthy liner notes, for those who want them). However, it's got all the key items: not only superior, witty singles of R&B verging on rock & roll like "Crazy Lover," "Oh! Oh! Get Out of the Car," the "Riot in Cell Block #9" sequel "The Big Break," and the convincingly Little Richard-like "Yama Yama Pretty Mama," but also an assortment of interesting sides by other artists on which he appeared. Prominent among those, of course, is the classic 1955 Etta James hit "The Wallflower (Roll With Me Henry)" (on which he took the uncredited male part of the vocal), though it also has more obscure outings he did in collaboration with James (the "Wallflower" follow-up "Hey Henry," a previously unreleased alternate take of which appears here), the Dreamers, and the Cadets, as well as both sides of his obscure 1954 single as half of the male-female duo Rickey & Jennell. (The Robins' "Riot in Cell Block #9," on which Berry provided the unforgettable low vocal line, is unfortunately missing, as it wasn't done for Modern.) This actually isn't Berry's best stuff, which is contained on Have "Louie" Will Travel, a separate Ace comp featuring his more rock & roll-oriented 1956-1962 recordings (including his original version of "Louie Louie"). Nor is it among the best mid-'50s stuff of this sort, with some ordinary doo wop and period R&B amidst the standouts. Still, it's certainly the best early Richard Berry anthology, and at its sly and sassy best, it's certainly worth hearing. ~ Richie Unterberger