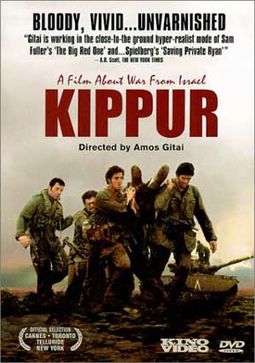 In 1973, on the Jewish high holy day of Yom Kippur, the Arab nations launched a massive military assault on the state of Israel. KIPPUR follows the paths of two Israeli soldiers as they face the chaos and carnage of battle. Weinraub (Leron Levo) is a sensitive, artistic sort. He quotes Herbert Marcuse to his friend, Ruso (Tomer Ruso), who is much more gung-ho, as they head off to battle. In the pandemonium at the front, the two fail to find their unit, and end up joining an airborne rescue unit. Amos Gitai avoids all sentimentality and sensation. He doesn't dwell on the politics of the war. His focus is on the men who experience the ugliness and tedium of battle and the effect this experience has on them. As the film gets deep down in the mud, literally, with these soldiers, we get a close-up look at the aftermath of the violence. These are stoic men, who never question the necessity of what they do. The actors deliver straightforward performances that enhance the realistic power of the film. Gitai is perhaps the world's best-known Israeli filmmaker, and KIPPUR is an excellent example of his intimately scaled, uncompromisingly honest work.