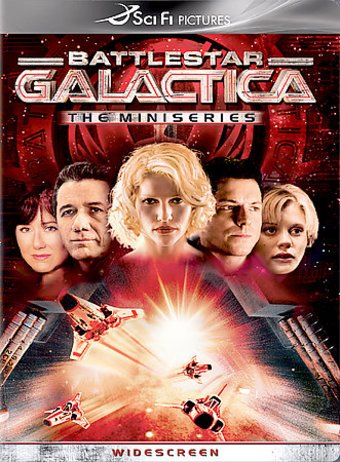 12K ratings
Currently Out of Stock: We'll get more as soon as possible
Notify Me When Available
Add to Wishlist
Format:  DVD
item number:  XTXB 06102D
Related products:
Serenity for $8.40
91% recommend us!

The popular 1970s sci-fi television show is updated and re-imagined in BATTLESTAR GALACTICA. It has been a generation since the Cylons, androids built by mankind to work and serve them, rebelled and disappeared into the cosmos. But now they have returned, bent on destroying the twelve worlds of their former masters. Commander William Adama (Edward James Olmos) manages to escape the destruction with a small portion of the human population on board the Battlestar Galactica, and now searches the far reaches of space for the lost colony of man known as Earth. Unfortunately, the Cylons are still in pursuit, determined to wipe out every trace of the human race. This mini-series of BATTLESTAR GALACTICA updates the original series with a darker tone, new CGI special effects, and by giving the Cylons the ability to mimic their prey, making them all the more dangerous. It shares with THE MATRIX and THE TERMINATOR series a vision of mankind undone by the very machines it created, and the continuing struggle between the mechanical and the organic that will determine the future.