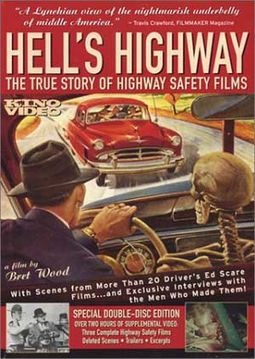 In 1960, accountant Richard Wayman and photographer Phyllis Vaughn started the Cleveland-based Highway Safety Foundation after amassing a sizeable collection of photos taken at auto crash sites and shooting an educational film, SIGNAL 30, which incorporated crash site footage. The Foundation's film production wing, Safety Enterprises, went on to produce a number of now-legendary auto safety films (including WHEELS OF TRAGEDY and MECHANIZED DEATH) incorporating extremely grisly real-life imagery, which were shown to unsuspecting high school students across the United States in the 1960s and 70s. Bret Miller's documentary takes a probing look into the strange story of the people who made these bizarre and haunting films. He includes interviews with genre experts such as educational film archivist Richard Prelinger and Something Weird Video's Mike Vraney, as well as Earle Deems and John Domer--two of the men who worked on these compelling curiosities. While the subject matter is sensationalistic by nature, Miller's approach is reverent, and, though the films have passed on into the land of pop cultural legend, one is never doubtful that those who made the films did so out of a well-intentioned sense of duty and purpose.