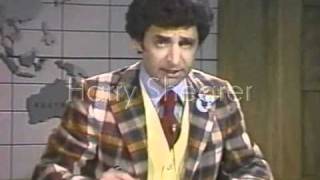 With relevant satire that's just as funny today as it was in 1975, the first season of SATURDAY NIGHT LIVE still triggers giggles from people even if they weren't even born when Gerald Ford was in office. The famous "Not Ready for Primetime Players" made their debut in this revolutionary sketch comedy show created by Lorne Michaels. Chevy Chase is hilarious as the first anchor of Weekend Update, and John Belushi shines as both Don Corleone and a samurai working at a deli. Whether playing a young girl or confused commentator Emily Latella, Gilda Radner is pitch perfect. Jane Curtin, Dan Aykroyd, and Laraine Newman round out this spectacular cast that has never been equaled in more than three decades of the show. This season began the show's tradition of getting top guest hosts including Richard Pryor, Buck Henry, and Candice Bergen. Musical guests include classic artists such as Simon and Garfunkel, ABBA, and Carly Simon. Each episode is in its original 90-minute format.