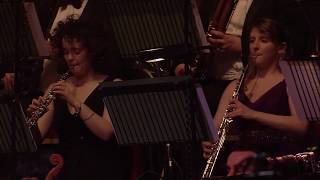 Tributee: Jon Lord .
The passing of Deep Purple keyboardist Jon Lord in 2012 was sad for the obvious reasons, but also because he was about to release a just finished re-imagining of his "Concerto for Group and Orchestra," a piece Deep Purple first played live at the Royal Albert Hall in 1969, and one that is often cited as the first true meeting of classical and rock. Lord was a big part of the heavy orchestral prog rock sound of Deep Purple, and he could rock when needed, or take center stage and play pretty as the soundtrack for a majestic autumn wind. He played with other bands as time went on, including Whitesnake, but in his later years he increasingly pursued his aspirations as a classical composer. Which brings us to this set, one of two volumes derived from a historic tribute concert held April 4, 2014 at Royal Albert Hall that marked the 45th anniversary of when Lord's "Concerto for Group and Orchestra" first debuted there. Surviving members of Deep Purple were on hand for the tribute, as well as Paul Weller, Whitesnake's Micky Moody, Iron Maiden's Bruce Dickinson, Yes keyboardist Rick Wakeman, and many others, including the Orion Orchestra conducted by Paul Mann. The evening opened with a classical set from the orchestra, which is what we have here, then went to a more rock-oriented second act, before concluding with a set by Deep Purple -- the rock and Deep Purple portions of the evening are available as Celebrating Jon Lord: The Rock Legend, the other volume of this tribute set. Among the highlights of this opening classical portion are the majestic "Fantasia" (from Sarabande), complete with horns, and a beautiful "All Those Years Ago," which features vocals from Micky Moody and illustrates just how much vision Lord really had for a classical/rock fusion, and in retrospect, how Deep Purple personified that vision. ~ Steve Leggett