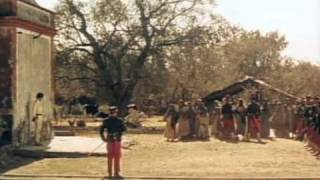 "The Church allows this for the sake of safety, but you may not take liberties."
- Sara (SHIRLEY MACLAINE) to Hogan (CLINT EASTWOOD)

Starring Clint Eastwood as mercenary gunfighter Hogan, TWO MULES FOR SISTER SARA opens with its star saving a naked woman from being gang-raped. He's more than a little surprised when the attractive woman, Sister Sara (Shirley McLaine), dons a habit. It seems she's deeply committed to a group of Mexican revolutionaries fighting against the French. Hogan agrees to escort her to the camp, since he's interested in helping them attack the French garrison, if the money is right. As they travel, Hogan becomes a bit suspicious of the nun's fondness for cigar smoking and the odd shot of whiskey. Near Santa Maria, Hogan's attempt to blow up a French ammunition train is foiled by an arrow in the shoulder, but after bandaging him, Sara helps the mercenary set off the planted charge with a rifle. When they reach the camp of Juarista commander Col. Beltran (Manolo Fabregas), Sister Sara displays a detailed knowledge of the layout of the French garrison while revealing her true identity, which comes as a surprise to no one but Hogan. This action-comedy includes some very funny moments between the stars, and the photography by Mexican national treasure Gabriel Figueroa is marvelous.

After saving a nun from an attempted rape, mercenary Hogan agrees to escort her safely through the desert. But the cigar-smoking Sister Sara has some very unusual habits, quite unlike any woman of God that Hogan's ever seen. And he finds it hard to keep his lustful impulses under control.