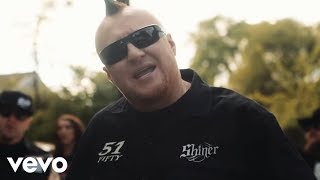 Recording information: Phivestarr, Nashville, TN.
Photographer: Eric Beffa.
Proving the Left Coast has its share of Average Joes and Joey Sixpacks, California's Moonshine Bandits hoot and holler their way back into the hick-hop fray on Calicountry, a rootin', tootin' good time and nothin' else. Approach the album sober and it's a single-minded, reckless crawl into a bottle with rap-rock as the soundtrack, but approach it slightly buzzed and with some "Back Off Man!" mudflaps on your rig, and the anthems overflow. One drunk encounter with "California Country" ("Lake in the woods and the water feels fine/Girls on the deck with no tan lines") and the infectious song is permanently stuck in the head, while "Throwdown," with the Lacs ("from California to Georgia, and every mudhole in between"), gets into a "rev it up, throw it down" chant that once ingested, keeps coming up like cheap beer. In short, these simple songs are hook-filled, instant party starters if all your rowdy friends are coming over tonight, and with Colt Ford, Danny Boone from Rehab, and many more guests ramblin' through, the album offers just enough variety to keep things lively, at least 'til the cops show up. ~ David Jeffries

Colt Ford
Answer To No One: The Colt Ford Classics
$15.30
Add to Cart