If he were any cooler, he'd still be frozen, baby! 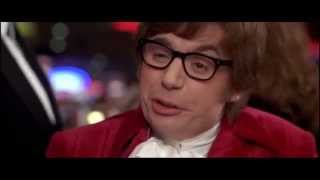 "It's Doctor Evil actually. I didn't spend four years at Evil Medical School to be called Mister Evil thank you very much."
"Austin Powers, Danger is my middle name."
"It's not my bag baby!"

AUSTIN POWERS: INTERNATIONAL MAN OF MYSTERY is the first in the comic series starring this bodacious 1960s spy played by the hilarious Mike Myers. Decked out in the gaudiest mod attire--ruffled shirts, tight-fitting candy-colored suits, horn-rimmed glasses, and prosthetic teeth--Austin Powers is anything but subtle. His near-constant exclamations of "Groovy, Baby," accompanied an uncandid flash of his flirtatious smile, only add to his wonderfully exaggerated hipster persona. Plotwise, Austin Powers and his enemy Dr. Evil (also played by Myers) awake from 30 years of frozen, cryogenic sleep to find themselves in the year 1997. A conniving Dr. Evil plots a reign of terror and mass destruction, but finds that his ideas and methods are a bit out of date. Our hero encounters a similar dilemma, realizing that he is definitely behind the times. A series of well-meaning though bumbling efforts to thwart the insidious Dr. Evil keep Austin Powers and his devastatingly beautiful partner Vanessa Kensington (Elizabeth Hurley) hard at work as they travel from London to Las Vegas. With this tongue-in-cheek send-up of James Bond spy films and 1960s cliches, director Jay Roach compliments Myers' over-the-top performance with a lighthearted soundtrack, fun photography, and amusingly retro sets.

It's a smashing shagadelic party as Mike Myers (Wayne's World 1 & 2, So I Married an Axe Murderer) and Elizabeth Hurley (Dangerous Ground) star in a non-stop, hilarious comedy adventure. Frozen in the 60's, secret agent Austin Powers (Myers) is thawed back into action to once again battle his archenemy Dr. Evil. With his sexy sidekick Ms. Kensington (Hurley), Austin must stop Dr. Evil's outrageous plot to control the world. But first, this time-warped swinger must get hip quick and discover that there's no free love in the 90's! An all-star supporting cast including Michael York, Robert Wagner, Mimi Rogers and Carrie Fisher make Austin Powers a wacky, far-out trip you won't forget.