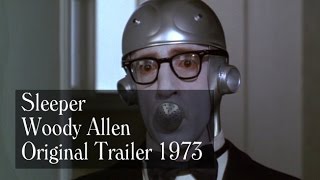 The sci-fi satire SLEEPER is often hailed as the best of Woody Allen's early comedies, which relied mostly on slapstick and quick verbal asides, but still had more than their share of comic intelligence. SLEEPER tells the tale of Miles Monroe (Allen), who is accidentally cryogenically frozen following a minor operation. Released 200 years later, in 2173, Miles blunders his way through a bizarre future, featuring plenty of props and situations for Allen to mine for laughs. Eventually he meets vapid, hedonistic "poet" Luna Schlosser (Diane Keaton), with whom he eventually joins a rebel group opposed to the oppressive government. As in his earlier BANANAS and LOVE AND DEATH, Allen's character stumbles into a revolutionary plot, revealing the anti-authoritarianism that will appear again and again in his films.

Loosely based on H.G. Wells' novel WHEN THE SLEEPER WAKES, the film features a strong parodic bent, particularly of the type of science fiction that was being written and filmed when it was made in 1973. Oppressive, faceless governments and the technological dominance over human life (altering even the most fundamental natural actions, such as sex) are the main tropes Allen skewers, as well as playing off the futuristic production design of films like A CLOCKWORK ORANGE and THX-1138. However, SLEEPER was still considered a strong work of science fiction, winning both the prestigious Hugo and Nebula Awards, which are given to the finest works in the genre.

The Agony and the Ecstasy (DVD)
$5.80 Super Savings
Add to Cart