What would you do if a blackmailer showed up peddling nudie pictures of your sweet wife? Why, plug the scoundrel and bury him under the backyard gazebo, of course! 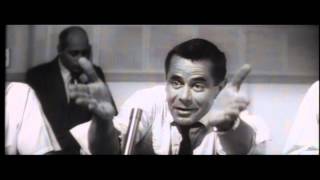 What would you do if a blackmailer showed up peddling nudie pictures of your sweet wife? Why, plug the scoundrel and bury him under the backyard gazebo, of course! Delightful screen farceurs Glenn Ford and Debbie Reynolds are up to their corpus delicti in laughs as a show-biz power couple with something to hide in director George Marshall's sly black comedy highlighted by a meticulously plotted, hilariously botched "perfect crime."

TV writer Elliot Nash (Glenn Ford) is happily married to Broadway star Nell (Debbie Reynolds), when a blackmailer arrives on the scene with photos of young Nell in her birthday suit. Nash quickly decides murder is the best method for disposing of the situation, and buries the blackmailer under the gazebo without realizing he's left just enough clues to get everyone on his case. But Elliot is in for a real scare when the blackmailer's body turns up elsewhere, leaving Elliot to wonder who it is he buried under the gazebo. Reynolds sings "Something Called Love" in this offbeat comedy, while legendary comedy director George Marshall pulls stellar performances from co-stars Carl Reiner, John McGiver, Doro Meraqnde, and Martin Landau.

Romance | Scams And Cons | Betrayal | Mishaps | Theatrical Release
This product is made-on-demand by the manufacturer using DVD-R recordable media. Almost all DVD players can play DVD-Rs (except for some older models made before 2000) - please consult your owner's manual for formats compatible with your player. These DVD-Rs may not play on all computers or DVD player/recorders. To address this, the manufacturer recommends viewing this product on a DVD player that does not have recording capability.