Rolling Stone: "...Each album has been a worthy product. The latest is no exception....They're still the Sistine Chapel of popular music..." 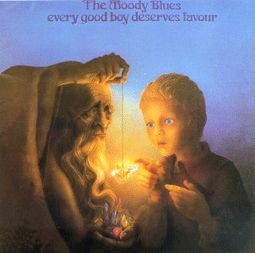 The Moody Blues: Ray Thomas (harmonica); Mike Pinder (keyboards); John Lodge (bass instrument); Graeme Edge (percussion); Justin Hayward .
Personnel: Justin Hayward , John Lodge (vocals, guitar); Ray Thomas (vocals, flute); Michael Pinder (vocals, keyboards); Graeme Edge (drums).
Audio Remasterers: Justin Hayward ; Paschal Byrne; Steve Fallone; Alberto Parodi.
Liner Note Author: John Reed .
Recording information: 11/04/1970-11/09/1970.
Illustrator: Phil Travers.
Photographer: Barry Plummer.
Though this 1971 release was issued at a time of enormous commercial success for the Moody Blues, EVERY GOOD BOY DESERVES FAVOUR contains some of the band's most adventurous music. The band had recently discovered the Moog synthesizer, and its presence is felt on much of the album. The opening "Procession" instantly sets this collection's experimental course, landing like a spacecraft among reams of cascading synthesizer before evolving into a soundscape of cricket chirps, thunderclaps, and tribal chanting. The next three minutes contain one of the most cathartic sonic explorations the band has ever put forth.
Other standout tracks include "After You Came," which features tessellated vocal layering and bluesy guitar work; "Emily," a song that John Lodge wrote for his daughter; and the rapturously symphonic "You Can Never Go Home." Rich, complex, powerful, and beautifully produced, EVERY GOOD BOY DESERVES FAVOUR brings together all of the Moody Blues' best qualities in one album, standing as the culmination of their fine '60s work, and the standard-bearer for the music to come.

49%off
The Moody Blues
In Search of the Lost Chord
$8.60 Super Savings
Add to Cart

19%off
The Moody Blues
A Question of Balance
$12.98 Super Savings
Add to Cart

23%off
Gerry & The Pacemakers
The Very Best of Gerry and the Pacemakers (CD)
$9.98 Super Savings
Add to Cart

24%off
The Moody Blues
On the Threshold of a Dream [Expanded Version] (CD)
$12.98 Super Savings
Add to Cart

49%off
Joe Cocker
With a Little Help From My Friends (CD)
$8.60 Super Savings
Add to Cart