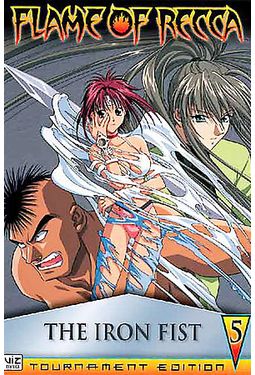 Four-hundred years ago, Recca was born to the clan of Hokage ninjas, destined to one day become leader of the group and gain the ability to create flames from his hands. But a vicious war targeting the Hokage begins, and Recca's mother uses a secret, magical technique to transport him to the future and safety. Now a "normal" high school student, Recca finds himself training in the martial arts, unaware that this fascination is preparing him for the evil that has followed him for four centuries. THE IRON FIST is the fifth volume collecting the fantasy/action series. In these episodes, Recca and the others from Team Hokage must get ready to fight Team Ki. If their opposing team's leader, Captain Kukai, is any indication of his team's malicious strength, Recca and his team may be in some real trouble.