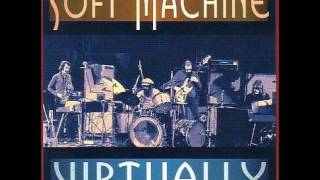 The best-known lineup of Soft Machine performing live at Gondel Filmkunsttheater in Bremen, Germany on March 23, 1971!

VIRTUALLY is a live performance recorded in 1971 for Radio Bremen, Germany but not released until 1998.
Soft Machine: Robert Wyatt (vocals, drums); Elton Dean (alto saxophone, saxello, electric piano); Mike Ratledge (electric piano, organ); Hugh Hopper (bass);
Recorded on March 23, 1971 at the Gondel Filmkunsttheater, Bremen, Germany.
Includes liner notes by Peter Schulze.
Personnel: Robert Wyatt (vocals, drums); Elton Dean (saxello, alto saxophone, electric piano); Mike Ratledge (electric piano, organ).
Recording information: Gondel Filmkunsttheater, Bremen, Germany (03/23/1971).
This set was recorded for Germany radio broadcast at a concert in Bremen in 1971. The performance came a few months prior to Robert Wyatt's departure from Soft Machine. The lineup on VIRTUALLY includes bass player Hugh Hopper, keyboardist Mike Ratledge, and saxophonist Elton Dean, who had joined a year-and-a-half prior. At the time, the group's most recent release (FOURTH) was their first album not to feature vocals. This is how things were to continue henceforth.
The 11 selections on VIRTUALLY include all four of FOURTH's featured compositions, although "Virtually" is played in abbreviated form-not as the nearly 20-minute-long, four-part suite Hopper had originally composed. Since it was intended for airing on Germany's Radio Bremen, the recording quality is superb throughout. The release of VIRTUALLY in 1998 marks the first commercial appearance of these recordings.