Currently Out of Stock: We'll get more as soon as possible
Notify Me When Available
Add to Wishlist
Format:  DVD
sku:  MIHM 642D
Our customers love us! 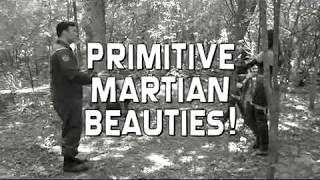 It is the future: 1987. Humanity has finally left the confines of its home world. When the two-man crew of the MARS-1 spaceship lands on the surface of the red planet, they are astonished to find it strangely Earth-like. After deciding to split up and scout around, Lieutenant Elliott stumbles across an amazing discovery -- primitive, matriarchal warrior women! He is promptly taken prisoner by the Martian beauties and led unwillingly across the alien landscape. While his commanding officer, Captain Jackson, searches for his lost comrade, Lieutenant Elliott encounters unimaginable excitement in the form of fierce monsters, exotic vistas, strange magic and most unexpectedly... true love! An astounding adventure unlike anything you've ever experienced, "Cave Women on Mars" is not to be missed!

This loving homage to 1950s science fiction finds a pair of astronauts from the futuristic 1980s exploring the Martian landscape. There they find a world beyond their wildest dreams, full of adventure, romance, and, of course, beautiful warrior women.