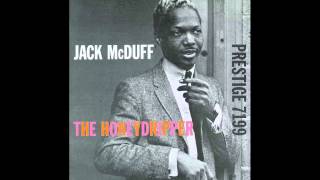 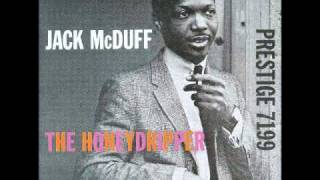 Personnel: Jack McDuff (organ); Jimmy Forrest (tenor saxophone); Grant Green (guitar); Ben Dixon (drums).
Recorded on February 3, 1961. Originally released on Prestige (7199).
Personnel: Jack McDuff (Hammond b-3 organ); Grant Green (guitar); Jimmy Forrest (tenor saxophone); Ben Dixon (drums).
The remaster of Jack McDuff's hard swinging 1961 album The Honeydripper was overseen by Rudy Van Gelder himself, adding to the Concord/Prestige catalog the same treatment Van Gelder had done for Blue Note. The date featured the big tenor Jimmy Forrest, drummer Ben Dixon, and Grant Green on guitar in his recording debut. Green not only held his own with McDuff on the title track, "Dink's Blues," and "Blues and Tonic," but he plays gorgeous fills and chord voicings in Henry Mancini's "I Want a Little Girl." Green was always more than a sideman as this date attests, and though he was part of the rhythm section, his playing is a standout on this date. McDuff was already in full possession of his voice as an organist, and his hard bop leanings began to subside here as he embraced a more soulful approach, no doubt informed by the effect Jimmy Smith was having on jazz with his crossover. This is an excellent date and should be picked up by anyone interested in McDuff as a great place to start, or for any serious collector because of the gorgeous sound of the remaster itself. ~ Thom Jurek