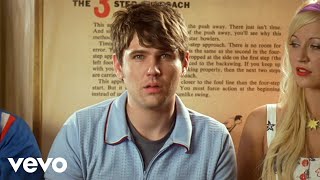 London-based trio Scouting for Girls released their debut self-titled album in September 2007 and immediately drew comparisons as a sort of cross between the anarchic punk of the Arctic Monkeys and the ultra-safe piano-led Keane. The vocals of Roy Stride, backed by friends Greg Churchouse and Peter Ellard, also fell into the category of music occupied by the Kaiser Chiefs hiring Lily Allen or Kate Nash as a guest vocalist. Most of the songs were about Stride's lack of success in his love life, every disaster that could possibly befall a young man attempting to date girls, or being bored in a dead-end job, and were very highly repetitive in the lyric department, especially the hit single "She's So Lovely" (with its three-syllable "love-er-ly") and its nonchalant way of rhyming "I love the way she makes me drool, I think she is beautiful." "I Need a Holiday" repeated the line "I wish it could be Sunday when I wake up everyday" over and over again, and "The Airplane Song" began with the unforgettable lyric "She's a strawberry milkshake." The album ended with tributes to "James Bond," particularly the Roger Moore incarnation, and Stride's boyhood crush on "Michaela Strachen," reflecting on another girl who got away, as she broke his heart when he was just 12. A fun pop album with pleasant melodies, not unlike McFly or Busted. ~ Sharon Mawer

48%off
Scouting for Girls
Everybody Wants to Be on TV
$5.70 CD Sale
Add to Cart

Scouting for Girls
Still Thinking About You
$9.10 CD Sale
Add to Cart

Scouting for Girls
The Light Between Us
$8.40 CD Sale
Add to Cart

Scouting for Girls
Everybody Wants To Be On TV
$4.98 CD Sale
Add to Cart