Love blooms for a NY reporter during a small-town tulip festival when the youngest of the seven daughters captures his heart. But Papa Van Maaster insists his girls get married chronologically. Snooty oldest daughter doesn't even have a suitor! 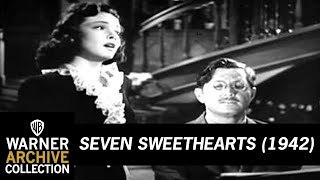 Love blooms for a New York reporter (Van Heflin) during a small-town tulip festival when the youngest of the seven Van Maaster daughters (Kathryn Grayson) captures his heart. But Papa Van Maaster (S.Z. Sakall) insists his girls get married chronologically. And since the snooty oldest daughter doesn't even have a suitor, the other six -- all of whom have admirers -- may have a long wait for the altar!

Director Frank Borzage (The Mortal Storm, 1932's A Farewell to Arms) brings his master-of-romance touch to all the lovesick complications seven sweethearts and their beaus can create. Music buoys the merriment along, including the oompah-pah-and-dance-filled festival and Grayson adorning several numbers with her silvery soprano.

This MGM musical lifts the premise of PRIDE AND PREJUDICE and plunks it down into the early 1900s. S.Z. Sakall is a restaurateur who has decreed that his seven daughters must marry in order of age -- the oldest one first. Kathryn Grayson isn't the oldest, but she has the sweetest singing voice, and it is she who bags the first husband (Van Heflin). For the record, the remaining six sisters are played by Marsha Hunt, Frances Rafferty, Cecilia Parker, Peggy Moran, Dorothy Morris and Frances Raeburn. SEVEN SWEETHEARTS was produced by Joe Pasternak, who'd been doing much the same material when in charge of Universal's Deanna Durbin vehicles.

Romance | Marriage | Weddings | Singers
This product is made-on-demand by the manufacturer using DVD-R recordable media. Almost all DVD players can play DVD-Rs (except for some older models made before 2000) - please consult your owner's manual for formats compatible with your player. These DVD-Rs may not play on all computers or DVD player/recorders. To address this, the manufacturer recommends viewing this product on a DVD player that does not have recording capability.