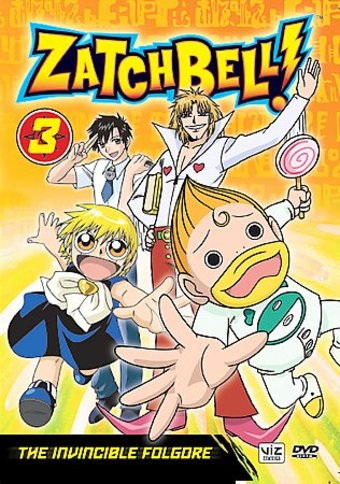 4 ratings
Currently Out of Stock: We'll get more as soon as possible
Notify Me When Available
Add to Wishlist
Format:  DVD
item number:  LMT 23500D
91% recommend us!

In this action-packed Japanese anime, the brilliant 14-year-old Kiyo is the victim of merciless teasing at school for his aloof and disdainful attitude. When Kiyo's archaeologist father finds a blond child named Zatch Bell, he sends Zatch to try to help Kiyo become more socially adept. However, the cute kid and his arcane red book hold a remarkable secret: Zatch is actually a mamodo, a race of childlike entities with magical powers. Every thousand years, the mamodo descend to Earth for a battle royal that determines who will be crowned king of the mamodo world. Now Kiyo must master the book and unleash Zatch's powers in time to confront the other human/mamodo duos that are springing up around them.

Their adventures continue in episodes 9-12 of the series: Riyo and Zatch must figure out the mystery of the red book's third spell in order to defeat the mohawked Sebe and his ultrafast mamodo Fein. They must also save the city from demolition at the hands of Shin and his mamodo Eshros, and deal with an Italian pop superstar and his shape-shifting mamodo. The final episode of the disc tells the story of Sherry, a girl haunted by dark memories, and her attempts to unleash the powers of Brago, a gravity-controlling mamodo.