NME (Magazine): "BLACKSTAR spins the spaceship back around and points it at the moon. Bowie's formidable record of reinventing himself with each new album remains intact."

Get email alerts for David Bowie
1.5K ratings
Out of Print: Future availability is unknown
Notify Me When Available
Add to Wishlist
Format:  CD
sku:  69WE5
Our customers love us! 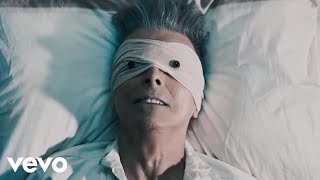 Rolling Stone
4 stars out of 5 -- "[O]ne of the most aggressively experimental records the singer has ever made....BLACKSTAR is a ricochet of textural eccentricity and pictorial-shrapnel writing."
Spin
"[A]rt-damaged ballads on which several excellent musicians flesh out tricky time signatures and unexpected chord progressions....BLACKSTAR finds Bowie and longtime producer Tony Visconti as hungry as they ever were..."
Entertainment Weekly
"Like nearly all his records, this one is a fully immersive experience; trips to Bowie-land - a place where every encounter is a metaphysical hall of mirrors, all the hours are after hours, and the cult of personality has its own G-force - don't really come any other way." -- Grade: A-
Magnet
"[O]ne of the most compelling and original works in a 50-plus-year career loaded with such transcendent moments."
Billboard - "BLACKSTAR is unmistakably a band record, showcasing a talented group of musicians who are comfortable navigating the songs' harmonically twisty byways....They give the record a distinctively eerie, muscular stamp."
NME (Magazine)
"BLACKSTAR spins the spaceship back around and points it at the moon. Bowie's formidable record of reinventing himself with each new album remains intact."
Paste (magazine) - "He never sounds less than marvelous....BLACKSTAR's theatrical bent is what is most striking."
Pitchfork (Website) - "BLACKSTAR becomes whole with its two-song denouement, which balances out the bruises and blood with a couple of salty tears. These are essentially classic David Bowie ballads..."
Clash (Magazine) - "BLACKSTAR may well be his final gift to us mere mortals, but it's an incredible final chapter."

Personnel: Ben Monder (guitar); Donny McCaslin (flute, woodwinds, saxophone); Jason Lindner (piano, organ, Wurlitzer organ, keyboards); Mark Guiliana (drums, percussion).
Audio Mixers: David Bowie; Tony Visconti.
Recording information: Human Worldwide; The Magic Shop.
It's difficult to separate 2016's Blackstar from The Next Day, the album David Bowie released with little warning in 2013. Arriving after a ten-year drought, The Next Day pulsated with the shock of the new -- as Bowie's first album of new material in a decade, how could it not? -- but ultimately it was grounded in history, something its cover made plain in its remix of Heroes artwork. Blackstar occasionally recalls parts of Bowie's past -- two of its key songs, "Sue (Or in a Season of Crime)" and "'Tis a Pity She Was a Whore," were even aired in 2014 as a supporting single for the Nothing Has Changed compilation (both are revamped for this album) -- but Bowie and producer Tony Visconti are unconcerned with weaving winking postmodern tapestries; now that they've shaken free their creative cobwebs, they're ready to explore. Certainly, the luxurious ten-minute sprawl of "Blackstar" -- a two-part suite stitched together by string feints and ominous saxophone -- suggests Bowie isn't encumbered with commercial aspirations, but Blackstar neither alienates nor does it wander into uncharted territory. For all its odd twists, the album proceeds logically, unfolding with stately purpose and sustaining a dark, glassy shimmer. It is music for the dead of night but not moments of desolation; it's created for the moment when today is over but tomorrow has yet to begin. Fittingly, the music itself is suspended in time, sometimes recalling the hard urban gloss of '70s prog -- Bowie's work, yes, but also Roxy Music and, especially, the Scott Walker of Nite Flights -- and sometimes evoking the drum'n'bass dabbling of the '90s incarnation of the Thin White Duke, sounds that can still suggest a coming future, but in the context of this album these flourishes are the foundation of a persistent present. This comfort with the now is the most striking thing about Blackstar: it is the sound of a restless artist feeling utterly at ease not only within his own skin but within his own time. To that end, Bowie recruited saxophonist Donny McCaslin and several of his New York cohorts to provide the instrumentation (and drafted disciple James Murphy to contribute percussion on a pair of cuts), a cast that suggests Blackstar goes a bit farther out than it actually does. Cannily front-loaded with its complicated cuts (songs that were not coincidentally also released as teaser singles), Blackstar starts at the fringe and works its way back toward familiar ground, ending with a trio of pop songs dressed in fancy electronics. These don't erase the heaviness of the opening quartet but such a sequencing suggests Blackstar is difficult when the main pleasure of the record is how utterly at ease it all feels: Bowie's joy in emphasizing the art in art-pop is palpable and its elegant, unhurried march resonates deeply. ~ Stephen Thomas Erlewine