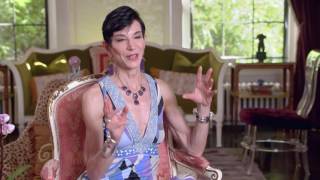 Amy Fine Collins on fashion in VALLEY OF THE DOLLS (Featurette)

An inarguable high watermark of modish Hollywood camp, rent from the deliciously pulpy eponymous novel by Jacqueline Susann. Three ambitious young women from different walks of life suffer through the show business meat grinder: an aspiring Broadway diva battles with addiction, a reluctant bombshell makes "art" movies to eke out a living for her ailing husband, and a sensible small-town girl turns modeling sensation. Sudsy, irresistible, and loaded with scenery-chewing, particularly in the memorable scene where a hysterical Duke cries to her pills, "My dolls! My beautiful dolls!" Academy Award Nominations: Best (Adapted) Score.

Film adaptation of Jacqueline Susann's melodramatic, bestselling potboiler. The story tracks the lives of three women -- naive New Englander Anne Welles, aspiring singer Neely O'Hara, and buxom beauty Jennifer North -- as they attempt to achieve fame and fortune in Hollywood. But as each starlet either rises to the top or falls to the bottom, she discovers that Hollywood is full of pitfalls and heartbreak. Instead of the happiness they seek, the trio finds only alcoholism, wild sexcapades, tantrums, porno roles, suicide, marital woes, wigs in the toilet, and a dependence on "dolls" -- slang for pills. Which of these ingenues will survive her "trip" through Hollywood'