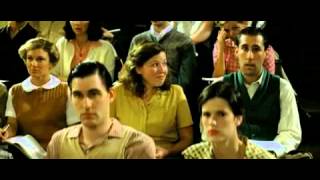 Liam Neeson gives a bravura performance as the title character in KINSEY, which details the controversial and dramatic rise of sex researcher Alfred C. Kinsey. Raised in a sexually repressed household with a preacher father (John Lithgow) who believes the zipper is the devil's work, young Kinsey goes against his father's wishes and studies biology, eventually becoming a leading authority on the gall wasp. His skill at classification, organization, and research, combined with his own burgeoning sexuality following his marriage to Clara McMillen (Laura Linney), leads him to begin investigating the nature of human sexuality. Working at Indiana University, Kinsey finds that sex is something many Americans have been waiting a long time to talk about. Unfortunately, others consider his work to be disgusting and want it ended. Writer-director Bill Condon (GODS AND MONSTERS) alternates between short black-and-white scenes of Kinsey answering his own sex survey questions, with longer color scenes that flash back to the important moments of his life. Kinsey's boyhood through his formative years, and his obsessions with the gall wasp and human sexual behavior, are thoroughly documented. The publication of the seminal books SEXUAL BEHAVIOR IN THE HUMAN MALE (1948) and SEXUAL BEHAVIOR IN THE HUMAN FEMALE (1953) mark his primary achievements. Interestingly, it is the second book that causes the biggest panic, as a repressed society refuses to believe that women have the same needs and desires as men. Neeson and Linney make a wonderfully refreshing couple, freely sharing each other for all to see. Peter Sarsgaard, Chris O'Donnell, and Timothy Hutton lend fine supporting work as Kinsey's staff. KINSEY is an enlightening, engaging, yet frightening film, revealing how far the understanding of American sexuality has come--and how far it still has to go.

The Eye of the Stranger (DVD)
$8.70 Super Savings
Add to Cart