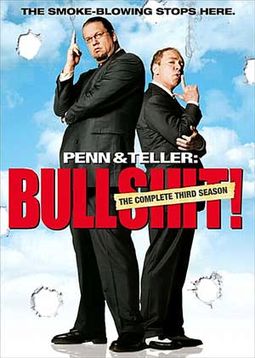 Nominated for an Emmy for Outstanding Reality Program, PENN & TELLER: BULLSHIT! features the comedic duo investigating a number of modern beliefs and institutions. In each episode, a topic is chosen that Penn and Teller investigate to reveal it for what it really is--a load of nonsense. They combine standard procedures of television journalism, such as interviews and undercover work, with Penn's angry tirades and Teller's mute displays of comic magic. In the third season of the program, collected here in its entirety, the subjects examined include circumcision, endangered species, various conspiracy theories, and gun control. PENN & TELLER: BULLSHIT! presents the philosophy of skepticism by showing its applicability to our everyday lives, and refreshingly without regard for either side of the political spectrum.

The Aristocrats
$19
Add to Cart