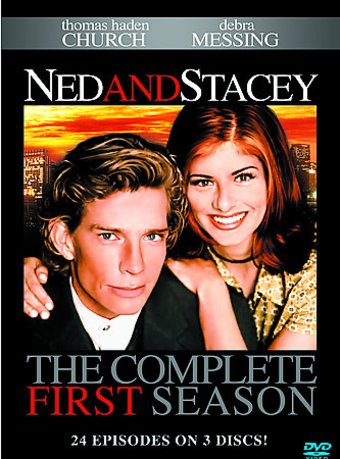 This underrated sitcom from the early 1990s stars a host of future stars, including Debra Messing (WILL & GRACE), Thomas Hayden Church (SIDEWAYS), and Greg Germann (ALLY MCBEAL). Ned (Church) is a ruthless, up-and-coming advertising executive whose amoral attitude is rivaled only by his unqualified sexism. Stacey (Messing) is a muckraking freelance journalist. Her brother-in-law, Eric (Germann), who works with Ned, sets the unlikely pair up on a blind date that goes horribly awry, with Stacey angrily telling Ned off. But when she later sees her entire spiel on an underwear commercial, she storms over to Ned's place to confront him. Unexpectedly, they bond, and Ned proposes a marriage of convenience, as he has recently had to lie about his marital status in order to secure a promotion. The two immediately set up house, and what ensues is a relationship that generates a great deal of friction, as well as a learning experience, some personal changes, and much hilarity. Although the premise is less than original, the chemistry of the actors carries the show, with the central characters sometimes even outshining their later, more well-known roles.