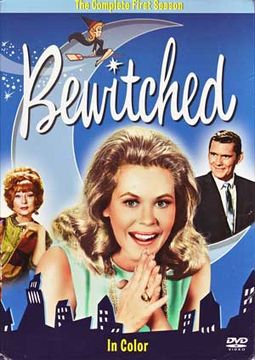 While the premise of this situation comedy rests on the supernatural powers of a housewife/witch, the writing pays more attention to character development than to actual witchery. When Samantha (Elizabeth Montgomery) decides to marry mortal Darrin Stephens (Dick York) much to the dismay of her mother Endora (Agnes Moorhead), she agrees to keep her powers at bay. But more often than not, Samantha just can't help herself, and uses her magic in a series of ridiculous and entertaining situations. This release contains all 36 episodes of the show's debut season. While the Stephens family grows in subsequent seasons (with the birth of Tabitha, and later Adam), Season One focuses on the newlyweds. Just a few of the episodes include "I, Darrin, Take This Witch, Samantha," "Mother Meets What's His Name," and "It's Magic." First airing in 1964, BEWITCHED really depended on the chemistry between its ensemble, which included Alice Pearce, Maurice Evans, George Tobias, Maria Lorne, and guest stars Adam West, Raquel Welch, Peggy Lipton, and Arte Johnson.