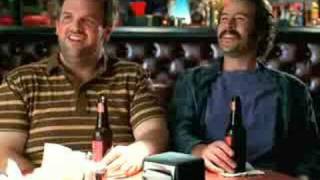 My Name Is Earl! Season 1 Trailer!

NBC's enormously popular and critically acclaimed sitcom MY NAME IS EARL stars Jason Lee as a reformed criminal who sees the light when he loses a winning lottery ticket after getting hit by a car. He decides his bad luck can be chalked up to bad karma, and sets about making amends with everyone he has ever wronged. This very long list includes a former victim of Earl's schoolyard bullying, whom he helps to come out of the closet, and a one-legged girl from whom Earl once stole a car. Ethan Suplee (MALLRATS) plays Earl's slow but good-hearted brother and sidekick, Randy, and Jaime Pressly (NOT ANOTHER TEEN MOVIE) plays Earl's ex-wife, Joy. Guest stars on the show include Beau Bridges as Earl's father, as well as Giovanni Ribisi (LOST IN TRANSLATION). Playing out like a small-screen version of a Coen brothers film, MY NAME IS EARL is funny, creative, clever, full of heart--and one of the best television series to come down the pike in quite a while. This collection presents the debut season in its entirety.