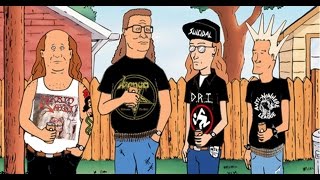 Disc 2/Side A: "The Bluegrass Is Always Greener," "The Substitute Spanish Prisoner," "Unfortunate Son," "Are You There God' It's Me, Margaret Hill"

Disc 2/Side B: "Tankin' It To The Streets," "Of Mice And Little Green Men," "Man Without A Country Club," "Beer And Loathing"

Hank Hill (the voice of Mike Judge) is the patriarch of his Texas family, a simple man trying to run a family, raise a son, and live a proper manly American life. However, the world refuses to cooperate, and Hank constantly grapples with all manner of difficulties and small-town challenges involving Peggy, his intelligent and enterprising wife; Bobby, his awkward and underachieving son; and his oddball blue-collar buddies. Creator Mike Judge followed up his BEAVIS AND BUTTHEAD with this popular, hilarious, and surprisingly sophisticated and insightful animated series. In the 14 episodes of season six, Hank facilitates a reconciliation of Vietnam and WWII veterans, joins an all-Asian country club, sells propane on a nude beach, and discovers that he has a Japanese half-brother.