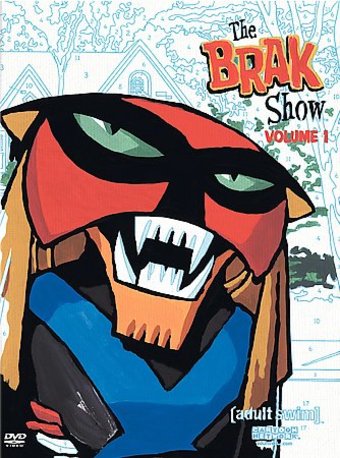 41 ratings
Currently Out of Stock: We'll get more as soon as possible
Notify Me When Available
Add to Wishlist
Format:  DVD  (2 Discs)
item number:  328H3
91% recommend us!

When the Cartoon Network revived the long-forgotten character of SPACE GHOST to host a bizarre animated/live-action crossover talk show, they found themselves with an unexpected hit on their hands. As the rugged superhero attempted to hold the show together, he was aided by his sidekicks Brak and Zorak. Brak initially branched out to host his own variety show (entitled CARTOON PLANET), alongside Space Ghost and Zorak. Now, the story of Brak's origins can be told in this prequel to the whole talk show/variety show melee that followed! Living in the suburbs on an unnamed planet, the young Brak and his family work their way through life, with the destructive Zorak a constant thorn in their sides as he leads Brak astray. Both funny and touching, THE BRAK SHOW should appeal to all SPACE GHOST fans looking for further adventures with their favorite characters.

What happens when two adults get together and have children' And what if those children grow up and go to school' That's the just-crazy-enough-to-work premise behind "The Brak Show." Also, Brak is in it.