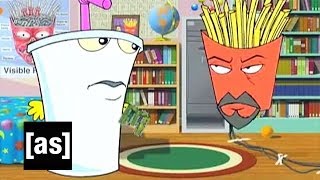 First of all, they're not teens. Secondly, there's not water involved. The whole Hunger Force thing' That's probably misleading, too. In short, if you have to ask what "Aqua Teen Hunger Force" is about, it is probably not a show for you. The rest of us will go on thrilling to the adventures of Frylock, Meatwad and Master Shake as they, you know... hang out.