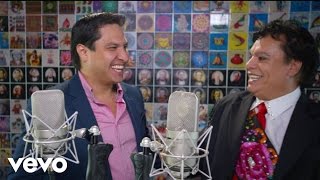 Having explored just about every possible avenue of Mexican popular music in the course of his long and illustrious career, Juan Gabriel decided to devote 2015 to the duet format. February saw the release of the first volume of D£o, and December that of its sequel, D£o, Vol. 2, thus effectively bookending the year with both compilations. The formula is as well-known as it is effective: Gabriel sings some of his greatest hits in the company of A-list Latin stars from a variety of genres and generations. He also takes the opportunity to have a little fun in the process by rehashing the arrangements, either to sound up-to-date or to suit his guest's style. "Yo Te Recuerdo" opens as a traditional Gabriel ballad, but the minute mark Marc Anthony drops by everything takes a sharp turn toward salsa. Hit single "La Frontera" begins as an exuberant banda song in deference to guest Juli¢n Alvarez, but gradually the horns become more and more prominent, female soul backing vocals make an appearance, and toward the end there is a clean break to introduce Colombian sensation J Balvin, who delivers a brief but full-frontal reggaeton cameo, only for the horns to come back with a vengeance -- by its conclusion it is almost a Wilson Pickett track. "Te Recuerdo Dulcemente," with Andr‚s Calamaro, sounds like a traditional ranchera played by a country rock band with plenty of lap steel, while "No Discutamos," with Paty Cant£, is midtempo Latin pop through and through. There is also a bolero with Jos‚ Feliciano, a bit of disco-funk with Mar¡a Jos‚, and more Urban Latin-dance with Wisin'. Most of the collaborations with other Latin romantic singers (Franco de Vita, Joan Sebastian, Miguel Poveda, etc.) are less innovative, but it would not be a Juan Gabriel album without its share of symphonic ballads. Like its predecessor, D£o, Vol. 2 proved extremely successful, which is hardly surprising considering Gabriel's popularity and the large number of guests involved, not to mention the guests' obvious delight in serenading such an icon of Mexican culture. Some editions include a DVD with five videos -- selections with Paty Cant£, Andr‚s Calamaro, J Balvin & Juli¢n Alvarez, and two more not otherwise present in the CD: "Abr zame Muy Fuerte" with Laura Pausini and "Si Quieres" with Natalia Jim‚nez. ~ Mariano Prunes

25%off
The Dubliners
Very Best of Original Dubliners [Import]
$8.98 on Sale
Add to Cart