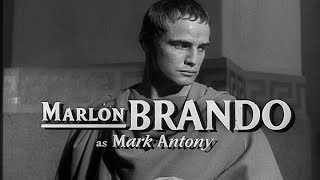 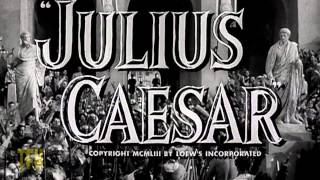 William Shakespeare's multifaceted dialogue, layered upon complex human motivations, gives actors a chance to sink or shine, and in this film adaptation of JULIUS CAESAR, Marlon Brando, John Gielgud, and James Mason prove themselves well up to the task, creating one of the most watchable versions of the tragic play. Warnings for Caesar to beware the Ides of March heighten a tension already made urgent by Cassius's exhortations to his fellow senators to assassinate Caesar before he gains more power. Controlled camera shots maintain the vintage stagelike feel of many scenes, reminding the viewer of JULIUS CAESAR's prestigious history, while characters flowing from one scene to the next break the play out of its past and into the more dynamic world as only the film drama can. The Oscar-nominated Brando's (as Marc Antony) powerful "Friends, Romans, countrymen" speech is the centerpiece of this masterwork, throbbing with pain, indignation, and secret intentions. This adaptation of the monumental play will reassure viewers that Shakespeare can be brought to marvelous, vibrant justice on the screen; it garnered an Academy Award
nomination for Best Picture.

Julius Caesar
Film adaptation of Shakespeare's play chronicling the aftermath of Caesar's assassination at the hands of Marc Anthony, Cassius and Brutus.

The grandeur of the Roman world and powerful jealousy thunder together in Joseph L. Mankiewicz's adaptation of William Shakespeare's famous JULIUS CAESAR. Scheming Cassius (John Gielgud), envious of the honors and love conferred upon Caesar by the Roman people, convinces Brutus (James Mason) and other senators that Caesar must be slain before he accepts the ultimate honor of king. But loyal Marc Antony (Marlon Brando), calling forth "Friends, Romans, countrymen," exhorts the Roman people to his cause of vindicating Caesar and driving the bloody senators from the city, transforming them from hunters into the hunted in this tense, riveting portrayal of the classic tragedy.