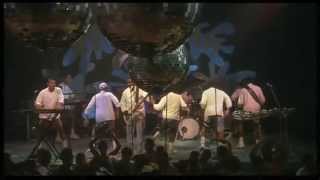 With SCHOOL DAZE, writer-director Spike Lee examines the tensions, biases, and frustrations of middle-class black youth at a southern college campus. Lee combines musical and fantasy sequences with satirical scenes to tell this pointed story of two cousins who attend the same all-black university. Dap Dunlap (Laurence Fishburne) is the solemn and dedicated activist, while Half-Pint (Lee), his younger cousin, spends most of his time rushing the school's most popular fraternity while desperately trying to find romance. As the film follows the two young men attempting to achieve their disparate goals, it also examines intraracial conflict in a school divided into warring camps: the light-skinned Wannabees and the dark-skinned Jigaboos. Lee, using the college environment as a microcosm in which to further explore black intraracial conflicts--for example, the way different camps wear their hair--doesn't forget that he's an entertainer first and foremost. SCHOOL DAZE, taking its cue from ANIMAL HOUSE, pokes fun at fraternities and sororities, including a hysterical extended sequence on the rigors of hazing. Featuring a pulsating soundtrack and an appearance by go-go legends EU, Lee's return to school is at once revealing and raucous.

At this African American college, amid gala coronations, football, fraternities, parades, and parties, a group of buddies find themselves caught up in romance, relationship rituals, and rivalries during one outrageous homecoming weekend. The story follows two cousins who have opposing attitudes when it comes to the purpose of college: learning versus partying. Spike Lee's sprawling exploration of the tensions that are present on black college campuses is an exhilarating blend of surreal musical, comedy, and poignant social criticism.