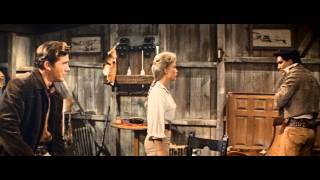 Elvis Presley stars as Pacer Burton, son of a white father (John McIntire) and Native American mother (Dolores del Rio) who finds his loyalties tested in a war of attrition between a fierce Indian tribe, the Kiowas, and a group of racist white settlers on the Texas frontier in 1870. Although his parents attempt to remain outside the fray, his father is eventually killed in an Indian attack on the settlement. A white man, enraged over the Indian attacks, kills Pacer's mother. Shunned by white society after the Indian attacks, Pacer elects to fight on the side of the Kiowas while his brother, Clint (Steve Forrest), stays with the settlers. When Clint rides into the Kiowa camp alone and kills their chief to avenge his father's murder, Pacer fights off the entire tribe to protect his brother, and Clint barely escapes with his life. After Pacer's girl, Roslyn Pierce (Barbara Eden), has tended to Clint's severe wounds, she's unsuccessful in trying to stop him from going off to try to save his brother's life. Presley gives his finest performance as the sensitive Pacer, supported by an excellent cast in what is likely his best film. The strong, uncompromising script on the tragic cost of racism is superbly directed by Don Siegel.

FLAMING STAR marks one of Elvis Presley's rare attempts at serious drama on the big screen. Although his own family is comprised of a mixture of ancestries--a white father, a white brother from his father's previous marriage, and a full-blooded Indian mother--Pacer (Presley) learns that when brutal means are used in the outside world, it cannot be long before such actions will disrupt his tranquil life and cause the bloodshed of those he holds dear.

63%off
The Beatles / Elvis Presley
Legends of Rock and Roll: The Beatles Explosion / Elvis...
$5.58 Spring Sale
Add to Cart