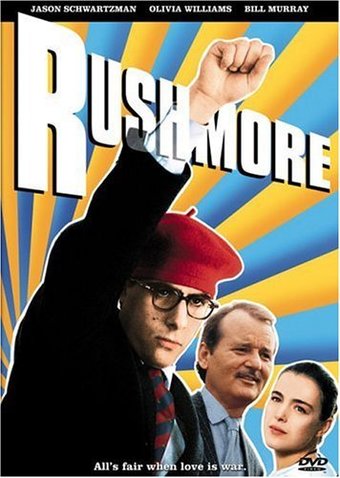 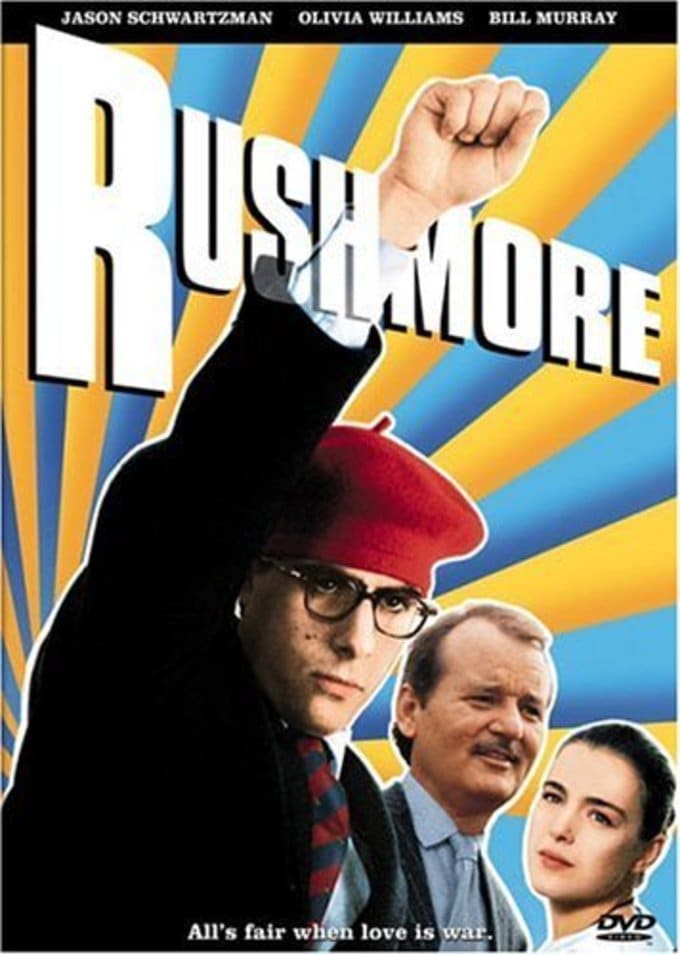 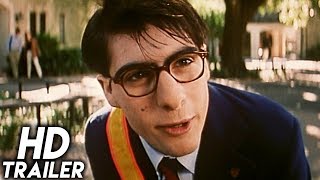 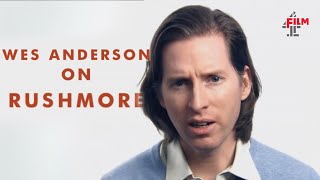 "When one man, for whatever reason, has the opportunity to lead an extraordinary life, he has no right to keep it to himself."
- a quote by Jacques-Yves Cousteau that is written in DIVING FOR SUNKEN TREASURE, a book read by Max Fischer (Jason Schwartzman)
"What's the secret, Max'"--Herman Blume (Bill Murray)
"The secret'"--Max
"Yeah, you seem to have it pretty figured out."--Mr. Blume
"The secret...I don't know. I think you just gotta find something you love to do and then do it for the rest of your life. For me, it's going to Rushmore."
- Max
"We both have dead people in our families."
- Max to Rosemary Cross (Olivia Williams)
"Has it ever crossed your mind that you're far too young for me'"--Miss Cross
"It crossed my mind that you might consider that a possibility, yeah."
- Max
"I like your nurse's uniform, guy."--Max to Dr. Flynn (Luke Wilson)
"These are O.R. scrubs."--Dr. Flynn
"Oh, are they'"
- Max
"I know about you and the teacher."
- Dirk Calloway (Mason Gamble) to Mr. Blume
"I saved Latin. What did you ever do'"
- Max to Mr. Blume
"Rushmore was my life. Now you are!"
- Max to Miss Cross
"She's my Rushmore, Max."--Mr. Blume to Max
"Yeah, I know. She was mine too."
- Max
"Although I will say that Edward has more spark and character and imagination in one fingernail than Herman Blume has in his entire body."--Miss Cross
"One dead fingernail."--Max

Director Wes Anderson's follow-up to the acclaimed BOTTLE ROCKET is a funny, warmhearted, and extremely sharp American response to the English "Angry Young Man" films of the 1960s, right down to its British Invasion soundtrack. Newcomer Jason Schwartzman creates a classic protagonist in Max Fischer, a sophomore at Rushmore Academy. He excels at every extracurricular activity in school, from theater to beekeeping. Gradewise, however, he's failing. He has few friends outside school save for wealthy but depressed industrialist Herman Blume (Bill Murray), father of obnoxious twin boys who also attend Rushmore. Enter Rosemary Cross (Olivia Williams), a beautiful young widowed teacher at Rushmore Elementary. While Max is immediately smitten with Miss Cross, she finds comfort in the company of the emotionally frazzled Blume. But Max won't let Blume have Miss Cross without a fight.

Anderson and cowriter Owen Wilson have created a script brimming with oddball humor at the surface, but at its core lies just enough realistic pain and disappointment to create an all-too-rare bittersweet edge, striking a subtle balance that few films ever achieve, and finally giving national treasure Bill Murray the chance to shine like never before. As director, Anderson displays his exceptional talents with careful choices in color palette, effective use of slow motion to comedic effect, and, most important, a brilliant selection of offbeat songs that are integral to the story. Easily one of the finest comedies since THE GRADUATE, RUSHMORE is a monument to brilliant filmmaking.

Rushmore
RUSHMORE is the story of a gifted, rebellious teenager named Max Fischer (Jason Schwartzman), a 10th grader at elite Rushmore Academy. Editor of the school newspaper, captain or president of innumerable clubs and societies, Max is also one of the worst students in the school, and the threat of expulsion hangs permanently over his head. Max's world is rocked when he falls for elegant 1st grade teacher Miss Cross (Olivia Williams) and he plans to erect an aquarium in her honor -- then finds himself competing for her affections with his friend, steel tycoon Mr. Blume (Bill Murray), the wealthy father of two of his classmates.

A bittersweet comedy more akin to British mod sensibilities and the French New Wave than traditional American teen flicks, Wes Anderson's film is an engaging, compassionate look into the life of 15-year-old Max Fischer (Jason Schwartzman), a poor scholarship student at the posh Rushmore Academy. An extracurricular overachiever with grand schemes, Max believes he can accomplish anything--including winning the love of the beautiful teacher, Miss Cross (the luminous Olivia Williams). Max's dauntless pursuit of her love and the subsequent conflict with his friend and rival Herman Blume (Bill Murray, in a stellar performance) make for a witty and insightful exploration of the joys and frustrations of adolescence.