A comedy about fear of commitment, hating your job, falling in love and other pop favorites. 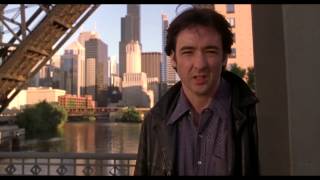 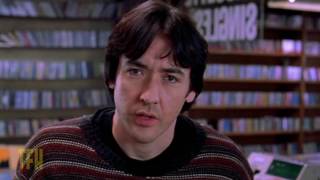 "Do I listen to pop music because I'm miserable' Or am I miserable because I listen to pop music'"
- Rob (John Cusack), in voice-over
"We're no longer called Sonic Death Monkey. We're on the verge of becoming Kathleen Turner Overdrive, but just for tonight, we are Barry Jive and His Uptown Five."
- Barry (Jack Black), introducing his band

A male-perspective confessional about being an adult--but not acting like one--HIGH FIDELITY is the story of Rob Gordon (John Cusack), the thirtysomething owner of Championship Vinyl, a record store in the suburbs of Chicago. Rob is in the throes of a difficult breakup with his girlfriend Laura (Iben Hjejle), and he creates a list of the ex-girlfriends who qualify as his Top Five Worst Breakups, then tracks them down one by one. At work, Rob's relationship with the geeky guys who help run the store, Dick (Todd Louiso) and Barry (Jack Black), is hilarious and juvenile: The three espouse encyclopedic knowledge of records while making lists of everything from the Top Five Side 1s and Track 1s to the Top Five Songs About Death. Director Stephen Frears works from a script based on the 1996 Nick Hornby novel of the same title, adapted by D.V. DeVincentis, Steve Pink, Cusack, and Scott Rosenberg. Frears integrates Cusack's signature goofball antics and gives him a series of talk-to-the-camera, Ferris Bueller-style monologues that Cusack delivers with personal ingenuity.

High Fidelity
From the guys who brought you GROSSE POINTE BLANK comes the absolutely hilarious HIGH FIDELITY. John Cusack (BEING JOHN MALKOVICH) stars as Rob Gordon, the owner of a semi-failing record store located on one of the back streets of Chicago. He sells music the old-fashioned way -- on vinyl, with two wacky clerks, the hysterically funny rock snob Barry (Jack Black) and the more quietly opinionated underachiever Dick (Todd Luiso). But Rob's business isn't the only thing in his life that's floundering -- his needle skips the love groove when his longtime girlfriend Laura (newcomer Iben Hjejle) walks out on him. And this forces him to examine his past failed attempts at romance the only way he knows how! For a rocking fun time, give HIGH FIDELITY a spin. It's sure to make your all-time top five list for comedies -- with a bullet.

Nick Hornby's popular novel makes the shift from London to Chicago in this Hollywood adaptation from the writing team responsible for GROSSE POINT BLANK. John Cusack stars as Rob, a thirtysomething record store owner who searches for the answer to the seemingly impossible question: Does he listen to pop music because he feels miserable, or is the music the cause of his misery' As he humorously deals with his store's pathetic employees (Jack Black and Todd Louiso), he embarks on a mission to track down his Top Five Worst Breakups to discover where things went wrong between himself and his girlfriend Laura (Iben Hjejle). Given director Stephen Frears's sure hand and Cusack's strong lead performance, HIGH FIDELITY is a funny and compelling look at growing up and falling in love.