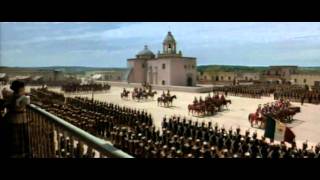 An epic that evokes films such as HOW THE WEST WAS WON and DANCES WITH WOLVES, THE ALAMO details the key 1863 battle fought to win Texas from the Mexican government. Originally constructed as a Spanish mission, the Alamo provided a secure post between Texas settlements and the troops of General Santa Anna (Emilio Echevarria), protecting the scores of people working to develop the budding territory, including Davy Crockett (Billy Bob Thornton), James Bowie (Jason Patric), and Sam Houston (Dennis Quaid). But when it was left in the care of an inexperienced leader, the men stationed at the Alamo found themselves in a deadly ambush by Santa Anna. With an insurmountable advantage in strategy and sheer numbers, Santa Anna led the complete slaughter of Alamo forces, an act that incited the ire of Houston who initiated the turnaround that brought Santa Anna's quick defeat.

Thornton provides a standout performance as Davy Crockett, who had gained notoriety as an adventurer, rumored to have jumped the Mississippi River. As the Alamo troops prepare to fight, Thornton's nuanced Crockett tempers their adrenalin with horrific battle tales and helps them come to terms with their impending mortality. While graphically reminding viewers of the horrors of war, the film also pays homage to the bravery and patriotism of the men who fought to liberate Texas, live in a free democratic society, and build better lives.

The Alamo
From the studio that brought you PEARL HARBOR ... Academy Award(R) winner Billy Bob Thornton (SLING BLADE, Best Adapted Screenplay, 1996; BAD SANTA), Dennis Quaid (THE ROOKIE), and Jason Patric (RUSH) team up for the acclaimed action epic about one of the most important events in American history! It's the heroic tale of the 200 brave men who made the ultimate sacrifice in the name of freedom defending a small Texas fort for 13 days against an entire army! Commanded by three men -- Lt. Col. William Travis (Patrick Wilson), James Bowie (Patric), and David Crockett (Thornton) -- their against-all-odds courage at the Alamo would forever live on as a rallying cry for liberty and independence!