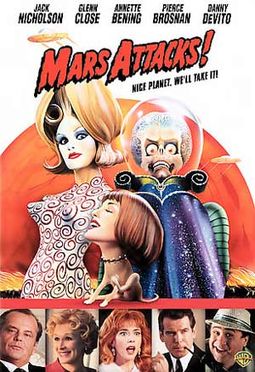 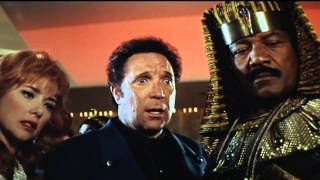 Director Tim Burton unleashes MARS ATTACKS!, a vicious, affectionate, brightly-colored homage to 1950s alien invasion movies. When a shiny silver flying saucer lands in the Nevada desert, a group of skull-faced Martians exit the gleaming craft. Although they claim to be peaceful, they promptly "vaporize" a gathering of unfortunate Earthlings, kicking off a bizarre high-tech war with wild special effects. This studiously campy sci-fi spoof, based on a series of Topps bubble-gum cards, gleefully parodies not only schlock B-horror movies, but also overblown blockbusters such as INDEPENDENCE DAY. This subversive film is helped along by an all-star cast including Jack Nicholson in dual roles as both a clueless U.S. President (with First Lady Glenn Close) and a Las Vegas sleazebag. The film follows the wacky WAR OF THE WORLDS-like proceedings from the points of view of numerous colorful characters, from the inane U.S. Press Secretary (Martin Short) to a trailer-park family (Lukas Haas and Sylvia Sidney), to singer Tom Jones (as himself).

Tim Burton's MARS ATTACKS! is an all-star, high-tech (and subversive) spoof of those science-fiction films of the 1950s, such as THE DAY THE EARTH STOOD STILL and THE WAR OF THE WORLDS.

The Hitchhiker's Guide to the Galaxy
$6.60
Add to Cart

The War of the Worlds (Criterion Collection)
$28
Add to Cart