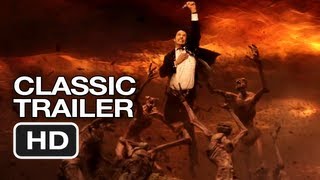 Rolling Stone - 03/10/2005
"CONSTANTINE has enough subtextual codes to spawn its own cult."
Uncut - 04/01/2005
"[D]irector Francis Lawrence pulls off some canny support casting and uses the effects budget well..."
Movieline's Hollywood Life - 02/01/2005
"CONSTANTINE is an FX-packed, noir-drenched adaptation..."
Sight and Sound - 04/01/2005
"As with the entire genre, much of the fun comes from the loopy theology and shuffling of occult macguffins..."
Entertainment Weekly - 07/29/2005
"Reeves is an unexpectedly decent fit, all cigarette-punctuated, screw-this detachment..."

With the ability to identify angels and demons as they exist on Earth, Constantine (Keanu Reeves) is tormented and set apart from other people. He is self destructive and angry, yet he does the right thing in protecting the citizens of Los Angeles from the dark forces that surround them. However, when he falls in love with a cop (Rachel Weisz), everything begins to change.

Andre Taieb / Ren‚ Guedj
The Psalms of the Jews of Constantine
$14.90 CD Sale
Add to Cart