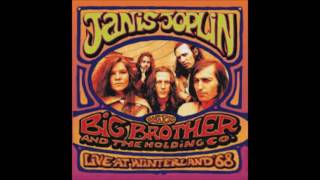 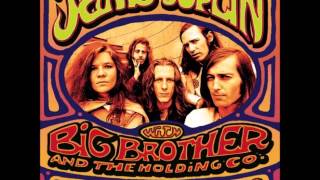 Entertainment Weekly - 6/5/98, p.85
"Joplin fans won't find any forgotten gems on this famous, beautifully recorded performance, but Big Brother, thrillingly raw and raunchy, emerges as one of the most unjustifiably maligned bands of the era..." - Rating: B+

/Big Brother & The Holding Company.
Big Brother & The Holding Company : Janis Joplin (vocals); Sam Andrews,
David Gurley (guitar, background vocals); Peter Albin (bass, background vocals); David Getz (drums, background vocals).
Recorded live at The Winterland, San Francisco, California on April 12 & 13, 1968.
Includes liner notes by Dave Getz, Sam Andrew, Beng Fong-Torres, Jaan Uhelszki, Ann Wilson, Nancy Wilson, Meredith Brooks, Deborah Harry, Kim Gordon, Amy Ray, Joan Jett, Chrissie Hynde, Stevie Nicks.
This concert recording finds Janis Joplin and Big Brother returning to San Francisco upon completing a triumphant East Coast tour that found acts such as B.B. King and Albert King opening for them, Big Brother were hailed as conquering heroes prior to their hitting the studio to record what would become CHEAP THRILLS. At the center of it all was Janis Joplin, a raw-throated Texan whose love of Ma Rainey and Bessie Smith was channeled through her music every night.
More than a mere lover of the blues, Joplin amply displayed her impressive range as she crooned her way through the standard "Summertime," poured her soul into Erma Franklin's "Piece Of My Heart" and belted out folkie Mark Spoelstra's "Magic Of Love." Whether in the traded vocals of Joplin and guitarist James Gurley on "Easy Rider" or the chugging insistency of "Combination Of The Two," LIVE AT WINTERLAND '68 perfectly demonstrates the fluid synergy between Joplin's singing and Big Brother's brand of acid-rock, capturing the intensity that this impressive unit carried through the two sets that make up this disc.

23%off
Janis Joplin
In Concert
$5.40 Super Savings
Add to Cart